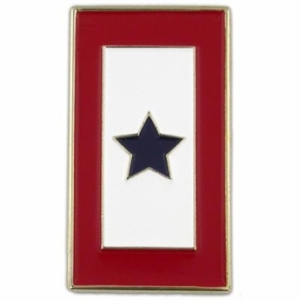 A while back I met this woman – I’m not even sure I technically “met” her, because we never talked to each other – but we shared a moment.

He’s on his first deployment right now, and as the nation observes Veteran’s Day, he’s on my mind more than usual. And that’s hard to do, because he’s always on my mind. I miss the boy so much it’s almost unbearable. Often, the mere thought of him brings me to tears. That happens in public more than I like.

I haven’t been able to hear his voice in months. I haven’t seen his face in even longer. I’m not allowed to know where he’s at, where he’s going, or when he’ll be back. All I know is when it comes to being a Navy mom, usually “no news is good news.” As long as no one has shown up at my door with information about him, things are okay. But my heart aches for my son. I worry every day about him and his shipmates.

And that is why I proudly wear my Blue Star Mom pin. When you see a woman with this pin, give her a smile. That’s what I did when I met that woman a few months back – well, kind of.

She didn’t wear a blue star. She had a gold star. When the blue star turn to gold, it means that mother’s worst nightmare has happened. Her child is never coming back.

A Gold Star Mom is a mom whose child died while serving in the US Military. She’ll never see that face, hear that laugh, or hold that hand again, because her child – and the entire family – sacrificed everything to serve and protect this country.

I can’t even imagine it. I literally can’t. I’m sitting here, crying at my computer at four in the morning, trying to find the words, and there aren’t any.

That’s exactly how it was when I met this Gold Star Mom. I saw her gold star pin, and there were no words I could say to her. I simply took her hand in mine, looked in her eyes, and let my thoughts and feelings show through my expression and a warm hug. She apparently needed that hug, because she didn’t let go for a long time. 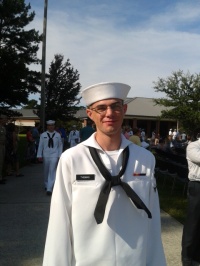 But still, I hold out hope that this is a nation worth fighting for, and all those mothers left with empty arms – and all us moms who don’t know where our kids are or when they’re coming home – that we all can have pride not just in our kids, but in our nation, on this Veteran’s Day.

If you see a mom with a Blue Star pin, give her a smile and a thank you. She needs it and deserves it.

If you see a mom with a Gold Star pin, give her all your respect.
She’s earned it.

One thought on “The Story of the Stars”